Background: The Port of Corpus Christi Authority (POCCA) is seeking a U.S. Army Corps of Engineers (USACE) permit to dredge La Quinta Channel to 54' over the next 10 years. However, on 6/24/21, citizens received the following communication from Michael R. Gala of USACE:

"There was an error on the Public Notice, and the Port is not proposing to deepen the La Quinta channel. They Port is only requesting to extend the current maintenance dredging an additional ten years. Therefore, the Corps will not be holding a public meeting or extend the public comment period as the Corps has determined the public could provide the required comments during the public notice period, and we would not receive any substantial information that couldn’t be provided during this period. The possible impacts to the human and aquatic environment will be reviewed during both the NEPA and 404(B)(1) reviews. They are requesting to maintain the currently authorized depth of -45ft mllw, with pre-maintenance and overage depths that were previously authorized in 2011. Max depth would be -49 ft mllw. The area around the proposed project area is currently shallower than he authorized depth and is the reason for the 10 year extension request on the  maintenance dredging permit."

Suggested Comments: The La Quinta Channel runs alongside the City of Ingleside on the Bay, from the Brass Turtle to Bahia Marina, before heading up past Kiewit. Maintenance dredging for the next decade will be quite disruptive, and we do not believe our city was given ample opportunity to understand how the channel deepening will impact us. So even though the official deadline for comments has passed, we encourage everyone in IOB to submit your concerns, questions, and demand for a Public Meeting on Permit #SWG-2006-00515 in IOB to ​swg_public_notice@usace.army.mil. Feel free to start by copying the paragraph below and change it up to make it your own. (More info about the project is available below the paragraph.) Or simply click on this link: https://p2a.co/lwYnNvb
I oppose Permit #SWG-2006-00515, the so-called "maintenance dredging" of the La Quinta Channel, which is proposed to take place over the next decade. Residents of and near the City of Ingleside on the Bay (IOB), which is located directly on the La Quinta Channel, need to have an opportunity to learn more about the project and ask questions at a public meeting - to be held in IOB. To my knowledge, our city was not informed of previous requests so that the public could learn more. We have already seen a tremendous increase in ship traffic, leading to erosion, seawall damage, silting of our canal, and hazardous boating conditions. Historical evidence suggests that the signficant dredging already in the Corpus Christi and La Quinta Channels has contributed to IOB's experiencing storm surge with every storm in the Gulf. The summer of 2020, there were about 8 flooding events that inundated about a quarter of the City. I am also concerned about the noise, smells, and air pollution caused from the incessant dredging - which will continue even beyond the 10 years. A main selling point of life in IOB is the view of the Corpus Christi skyline, which will be obstructed by the creation of spoil islands for the dredge material. The heavy silting due to dredging will snuff out even more seagrass, causing fish, marine mammals, and seabirds to leave the area as it becomes a dead zone for wildlife. I'm also concerned about the wakes, pollution, and safety risks that will come from increased ship traffic when the channel is deepened. I fear that we will be more at risk of ship collisions, large scale spills, and even terrorist acts. Why is it that Texans should risk losing so much for the benefit of private industry? 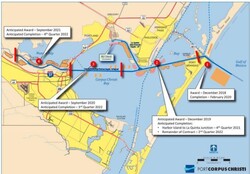 Purpose of Channel Deepening by the Port

The Port of Corpus Christi wants to "maintenance dredge" the channel to 54' to make it possible to fully load VLCCs (Very Large Crude Carriers) with liquefied natural gas and crude oil.

Potential impacts to IOB of this 10-year deepening project include: