Video (English): Featuring Cathy Fulton and Dan Pecore of Port Aransas
Video (Spanish): Featuring Chon Serna of Portland
drive.google.com/drive/folders/1NfrxxkMgfnqsro7T5R9n4Nks8vVF0VMV?usp=sharingLink to Draft Environmental Impact Statement (DEIS) Components & Comments
Click HERE (shortcut) OR email comments to SWG201900067@usace.army.mil:
1) oppose the permit,
2) request extension of time to review the DEIS,
3) request public meetings in Port Aransas and Aransas Pass,
4) describe who you are (e.g., where you live in relation to the area, your role (e.g., public official, business owner, etc.), special training/degree/expertise),
5) include your specific concerns (preferably in your own words), about topics like these (see PAC's Top 20 Concerns): 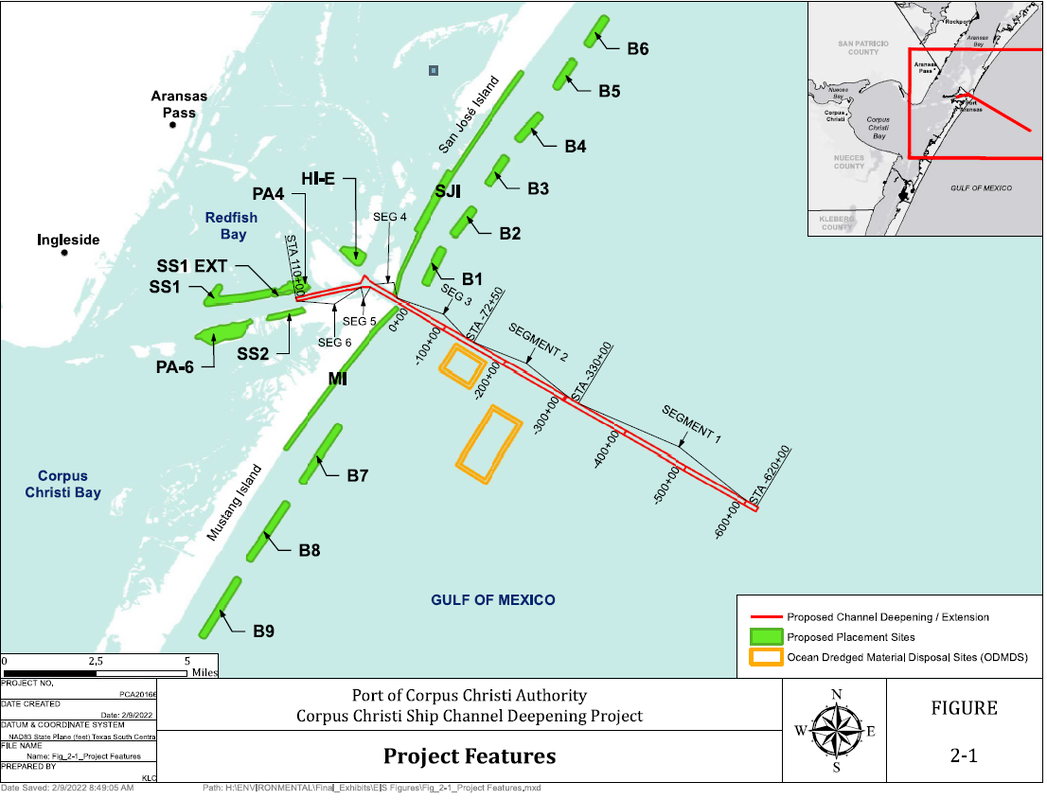 Figure 1: New Spoil Islands: The image above shows the various spoil islands that will be created in and around the beaches at Port Aransas from the estimated 46 million cubic yards (MCY) of material dredged up from this project. This includes spoil islands to protect San Jose Island, which is privately owned by the Bass Family. In the process, several hundred acres of seagrass and wetlands in Redfish Bay will be filled. The Port of Corpus Christi is to trying to claim that dredge placement is "beneficial use" - that reshaping thousands of years of natural processes that formed these barrier islands, bays, and estuaries is the only way to protect the bay system from the ravages of climate change.

Figure 2: Communities and the Bay System at Risk: Dramatically deepening the Channel will put Coastal Bend communities already impacted by rising sea levels and climate change at greater risk of increased storm surge and rising tides. Aquatic habitat and fishing will be affected due to "dredge and fill" activities that destroy habitat and increase sedimentation, turbidity, and salinity inside the Bay system. At a time when the world is transitioning to clean and renewable energy sources, it doesn't make sense for taxpayers to fund projects that will increase fossil fuel consumption and accelerate global warming (Intergovernmental Panel on Climate Change, 2021).
BACKGROUND:
In response to public pushback at a scoping meeting in 2020, the U.S. Army Corps of Engineers (USACE), required the Port of Corpus Christi (PCCA) to complete a Draft Environmental Impact Statement (EIS) to prove its claims that "no significant impacts" would result from deepening the channel to 75-80' (as deep as the Suez Canal). The last EIS for deepening the Corpus Christi Ship Channel (to a depth of 54') was completed in 2003, and that deepening is still ongoing. Already, Ingleside on the Bay has seen impacts from deepening just to 54', experiencing up to 4' of storm surge with every tropical storm in the Gulf, no matter where it occurs. In 2003, the socioeconomic justifaction for taxpayer support of channel modifications was to position the Coastal Bend an import hub to support the nation. Today, the project's justification is solely to increase oil exports to benefit the Port's private petroleum customers. The maps and information below show, in more detail, what the Port is trying to do and why Coastal Bend residents should speak out about their concerns.

HOW YOU CAN HELP: This monster Draft Environmental Impact Statement (EIS) contains 3 volumes, over 2500 pages, and 16 appendices, and is loaded with interesting information - including cumulative impacts from 42 other projects in the four-county Coastal Bend region (San Patricio, Nueces, Aransas, Refugio). Please help us review the topics that most interest you (e.g., dredge placement, fish and wildlife, ship traffic, hydrodynamics, sediement, cultural resources, etc.), and submit YOUR concerns to the U.S. Army Corps (USACE) before the deadline of 8/9/22! Every voice matters; USACE needs to know that folks are watching and care about the Coastal Bend.

HOW TO ACCESS DOCUMENTS: Click HERE.
HOW TO SUBMIT COMMENTS: Send an email to SWG201900067@usace.army.mil: 1) oppose the permit, 2) ask for more time to review the DEIS, 3) ask for public meetings in Port Aransas and Aransas Pass, and 4) include your specific concerns. There is no limit on the number of emails you can send. The more people who speak up, the better. Getting feedback from the affected public is an important part of a project of this magnitude, so let your voice be heard!
​
Sample Comments: IOBCWA member Chon Serna has graciously agreed to share his detailed comments, which will help give you a good idea of what's wrong with this permit. A list of Project Impacts is also provided below. It's a work in progress, since there's so much information to cover. Please feel free to use your own words and submit questions and comments expressing what you're most concerned about. 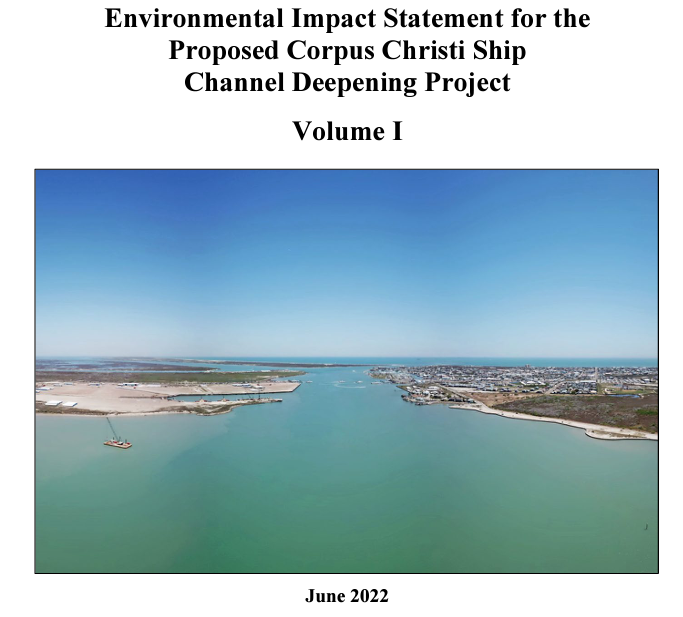 Private Oil Export Companies will Benefit: The Port of Corpus Christi is seeking a permit from the U.S. Army Corps of Engineers to deepen the Corpus Christi Ship Channel to enable fully loading of VLCCs (Very Large Crude Carriers) and post-Panamax ships with crude oil inside Corpus Christi Bay instead of going offshore, as they do now. The current request is to deepen Corpus Christi Ship Channel from 54 feet to as much as 80 feet (as deep as the Suez Canal) for 13 miles from the Gulf to oil export terminals (yet to be built) on Harbor Island. This will enable a modern day short-term gold rush - making it cheaper for private oil companies to extract and pipe oil from the Permian Basin and Eagle Ford Shale to the coast for shipping abroad. This will be done at at taxpayer expense and cause permanent ecological changes.
Current Ship Channel Deepening: Under previous permits, the Port of Corpus Christi has already been authorized to deepen the channel to 54', as shown in the figure below. Dredging is currently occurring in Segment 2  - from Port Aransas to Ingleside on the Bay. Without even assessing the impacts from that deepening, the Port is now asking (in this current project up for comment) that Segment 1 - from the Gulf to Port Aransas - be deepened by over 20 feet! Ingleside on the Bay is already experiencing something new - 4 foot storm surges with every storm anywhere in the Gulf, no matter where it hits. Channel deepening is known to be a major contributor to increased storm surge - and the Draft EIS even acknowledges this! How many more communities will be at risk with a much deeper channel? 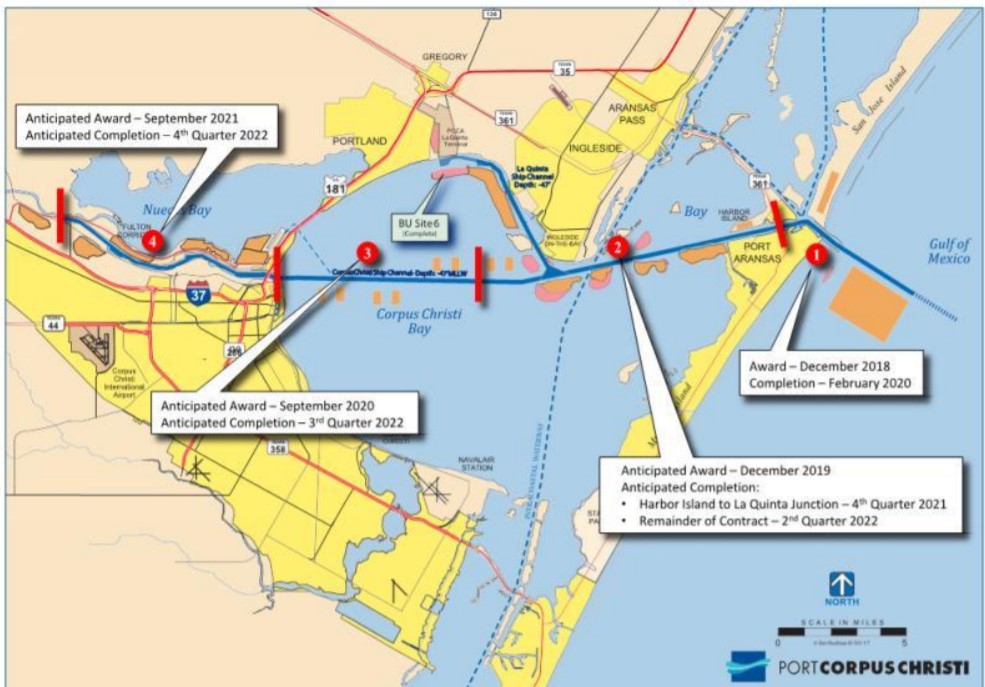